After the fairly volatile first quarter, April brought more decisively positive stock market returns, while bonds paused their losing streak. The main April takeaways for investors were threefold. First, improving economic sentiment would no longer push up bond yields, therefore easing the competition for sources of yield that had become the main headwind for equities in the first quarter. Second, strongly rising commodity prices and annual corporate earnings growth touching 50% provided solid evidence that recent equity market optimism had an increasingly solid base in the real economy. Third, the regional picture remains changeable, with Europe no longer significantly trailing the US, whereas last year’s regional darlings in East Asia (especially the Chinese and Japanese markets) have become this year’s laggards.

The rotational forces that set back the US tech giants in the first quarter eased, confirming the view that their valuations have become increasingly correlated with bond valuations. However, despite returning a set of astonishingly strong Q1 earnings results, they still no longer lead markets. Meanwhile, the sheer number of company earnings which continue to beat even the high bar of lofty analyst forecasts is testament to the breadth of the 2021 stock market positivity, and suggests further reasons to remain optimistic in the medium-term.

In regional terms, the US led market gains, rising 5%, with Europe and the UK following closely behind, up 4.2% and 4.1%. Emerging Markets posted a respectable 2% gain in April, given the aggregate was dragged down by flat to negative returns from China. Meanwhile the 1.9% decline in Japanese stocks had as much to do with proximity to China as with a pick‑up in domestic COVID cases, rather than any suggestion of underlying weakness.

The modest gain in global bonds snapped a streak of declines as central banks appeared to finally have their message heard that they are in no rush to roll back monetary stimulus, and want to see actual rather than just forecasted progress.

In return terms, the biggest story in April was the major rise in commodity prices across the board, with agricultural prices in particular hitting multi-year highs. Copper, a key industrial bellwether, topped the leader board with a +12.1% increase, taking it to its highest level in a decade. The increase was aided by continued hopes for the global economic recovery as the vaccine rollout proceeds, as well as the fact that copper stands to benefit from a wave of fiscal support underpinning fresh spending on infrastructure and clean energy goals. Meanwhile, oil prices maintained their existing lead for the year-to-date (YTD), with both the US (West Texas) and international (Brent) benchmarks moving higher, to take their US dollar YTD gains to +31% and +29.8%, respectively. As with copper, hopes for a strong recovery after the pandemic have supported gains, with oil set to be in demand as economies open up once again.

Overall, there was little for investors to dislike about returns in April. Central bank support looks set to continue, fiscal support from governments is increasing, particularly with the new US administration determined to recapture its world leader status and reputation as the engine of global growth – a position which it effectively forfeited to China after the global financial crisis. Company earnings and profit margins are expanding and the economic data suggests a decisive post-pandemic rebound is firmly on the cards.

As always, there are various serious risks and ‘unknown unknowns’ capable of spoiling the party, but at this point the biggest question for investors is whether the economic recovery will simply return us to the status quo before the pandemic, or whether the opportunity for governments to build society back better, stronger and greener, will be seized, putting us in a fundamentally better place than we were before the pandemic. 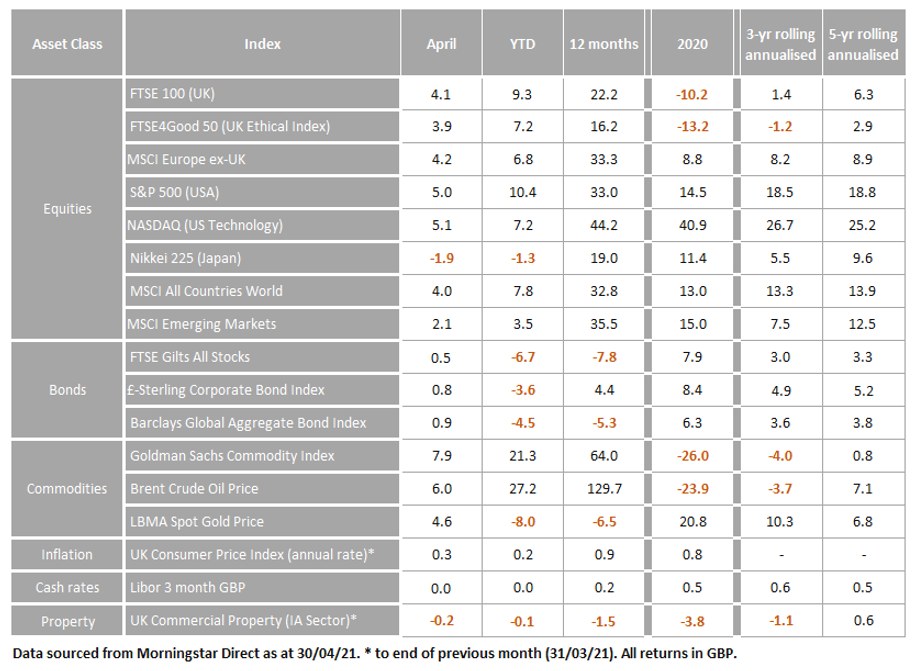