After a promising start, in the end, August turned into a rough ride in capital markets. Equity markets across the world took a downturn, and bond yields rose once more, putting downward pressure on bond prices. British bonds were particularly hard hit, with the FTSE Gilts All Stocks losing 7.6% on the month. For UK investors, global stocks actually generated positive returns in sterling terms. This may come as a surprise for those watching the doom and gloom headlines, but it was almost entirely down to currency moves. Sterling had a torrid month, losing a substantial amount of its value against the US dollar, which made overseas holdings more valuable for UK investors.

The last few weeks marked a change from the previous month. July was good for investors, as markets took a more positive view of the bond outlook. This was driven by an expectation that the Fed would revise its aggressive policy stance, a view that was backed up by lower oil prices, falling inflation expectations and (seemingly) from comments by Fed chair Jay Powell that Fed policy tightness may be nearing its apex.

While July’s positivity initially carried over into August, it soon became clear that the Fed was not going to ease its hawkishness any time soon. Fed members announced they were still focused on the tightness of the US labour market, showing a strong concern for fighting inflation. Data showed America’s jobs market was indeed very strong, with a startling 528,000 jobs added to the non-farm payroll at the start of the month, while falling oil prices took the pressure off the discretionary spending budgets of US consumers.

There was no official Fed meeting this month, but the spotlight was still on Powell for his speech at the central bankers’ summer summit in Jackson Hole, Wyoming. Powell made it clear that markets misinterpreted his comments back in July and to expect plateauing rates for 2023, rather than an early peak. Markets reacted strongly from then on, convinced that the Fed will remain hawkish until labour markets ease, and nothing policymakers have said or done yet has softened this view.

Both nominal and real (inflation-adjusted) bond yields subsequently rose, nearly reaching the highs seen in June. This was a clear signal that markets believed in the Fed’s ability to bring inflation back under control, even at the expense of economic growth. This shift was largely responsible for the equities downturn. Just as the falling ‘risk-free’ rate made stocks more attractive in July, its reversal put a dampener on market sentiment. This also led to some interesting market dynamics: value stocks once again outperformed growth by around 2% globally, while small caps performed fairly well relative to large cap companies (with the exception of the UK).

Unsurprisingly, the energy sector was the month’s best performer, with the anticipation of extreme supply-side problems during the winter causing a huge spike in prices, and profits. At the regional level, Emerging Markets (EM) were the best performing region, with the MSCI EM index climbing 5% in sterling terms (more or less flat in local currency terms). This is somewhat surprising, given the pessimism surrounding the global economy. Some of the outperformance could be explained by commodity strength, but this was challenged by the fact that commodities outside of natural gas did not improve in August. We dedicate a separate article this week to EM trends.

Gas prices remain a major problem for the UK and Europe. Russia halted supply of Nord Stream gas in the middle of August and, while this came as a surprise, it is surely a precursor to continued supply disruption in the Autumn, as Russia continues to use its energy pipelines into Europe as a means of influencing public opinion. Russian President Vladimir Putin will have been satisfied to see rising European energy prices as the big story of the month, as energy inflation pushed higher and higher. Unfortunately, a recession here and on the continent is now all but inevitable, at least if supply-side issues continue – more or less as markets had already anticipated earlier in the year.

Despite the Fed’s inflation concerns, the US is in a very different situation. Its apparent stability in the face of trouble elsewhere led to a sharp rise in the value of the dollar, backed up by a general risk-off move by global investors, which lessened the price-push impact of import prices. This, together with the still strong labour market, helped to bring back demand-led inflation fears of overheating consumer and business demand. On the other hand, sterling and the euro suffered, compounding import-driven price rises and thereby the market weaknesses in wider Europe. These supply-side price shock issues have forced the Bank of England (BoE) and European Central Bank (ECB) to take a tougher stance on inflation fighting, despite the immense weakness their economies face into autumn and winter. So, even though for very different reasons and differing fortunes, all the major central banks are looking hawkish.

China was also in the news in August, for all the wrong reasons. The air and naval blockade of Taiwan has been worrying enough on its own, but it also signals a worsening relationship with the US. Rumour has it that President Biden tacitly approved congress leader Nancy Pelosi’s visit to Taiwan, a move that infuriated the Chinese leadership. Poor relations between the world’s two biggest economies is not good news, particular at such a dire moment for global growth.

In the short term, the property market is more important for China. The real estate sector is still unstable, and the slow-motion collapse of Evergrande (and others) is still reverberating around China’s economy. This has led to property price falls and so knocked on to lower consumer confidence.

President Xi Jinping and his politburo are reluctant to reignite rises in already unaffordable property valuations.  However, policy moves in other areas became even more aggressive through the month, with another $300 billion spending programme for this year on top of the $2,300 billion already scheduled (compare that to Biden’s $1,100 billion infrastructure programme, due to be spread over 10 years). Having slid through the early part of August, China’s equity markets managed to stabilise and outperform in the second half of the month.

In summary then, while the third quarter has so far produced positive returns for UK investors on the back of the strong July performance, market dynamics at the end of August and the beginning of September do remind us of June’s dire straits. It means that markets are anticipating much of what is expected to hit the economy and businesses in the coming months. Any improvement in the level of uncertainty around the European gas crisis, the US labour market tightness easing, and China digging itself out of its slowdown should provide significant and sudden market upside from current levels.

The opposite is obviously true for matters going in the other direction. While a short, shallow recession is all but priced in, near-term economic disaster is not. Contrary to the prevailing media temperature, we see little to suggest disaster unless new ‘unknown unknowns’ unfold on the negative side of this equation. On the positive side, the prospect of imminent government policy action to soften the blow of sky-high energy prices direction could turn the dial, as did the news that Germany’s gas dependency on Russia had declined from 60% to under 10% compared to August last year. 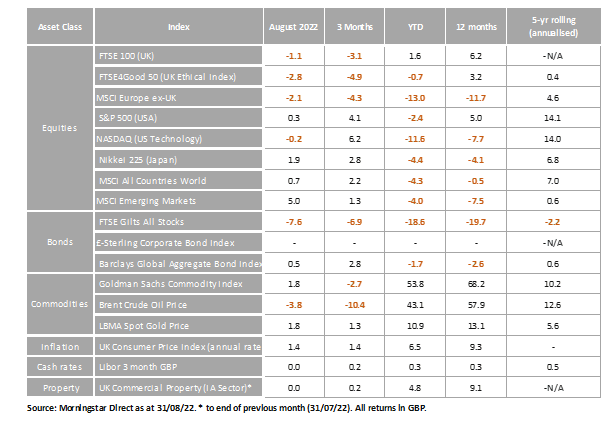