For global investors, December was a suitably drab end to a dreary year. The equity rally which had gained momentum since autumn lost steam coming into the winter months. For sterling investors, global equities lost 4.9% throughout December. This capped off a fall of 8.1% for 2022 overall. Once again, rising yields, sharply tighter monetary policy, runaway inflation and slowing global growth conspired to make conditions extremely challenging. The table below shows the monthly, quarterly and year-end results across different asset classes. As you can see, and particularly compared to 2021, it was a pretty frosty Christmas after all.

Despite the apparent lack of merriment, equity markets did experience a “Santa rally” over the Christmas break. This refers to a strangely common trend where stocks climb in the last five trading days of a year and the first two trading days of the next. This time round, that period ran from 23 December to 4 January and saw the S&P 500 gain a modest 0.8%. That technically constitutes a Santa rally, but is hardly one to ring sleigh bells for.

That lowly gain was entirely down to an early January bounce, as the readings for December were decidedly negative. Here in the UK, large cap equities finished the month down 1.5%. This was on the back of general pessimism about the UK economy, which finished the year with multiple negative data releases. The Bank of England continues to predict pain for Britain, while pushing ahead with its interest rate rises.

Despite this, the UK stock market recorded decent returns for the year overall. In fact, the UK was the only major developed economy to record positive equity returns in 2022. Unfortunately, we should not interpret this as confidence in the domestic economy. Many of the companies in the FTSE 100 derive their revenue streams from overseas, in particular from commodities, including fossil fuels. Those decent returns are largely due to this commodity exposure, combined with the weakness of sterling, which boosted the value of overseas revenues for UK companies.

Emerging markets (EMs) were also weak, declining 2.4% in sterling terms over the month. The environment for EM assets was extremely challenging in 2022, as they tend to be very sensitive to global monetary policy, the value of the dollar, and investor sentiment – all of which were under intense pressure throughout the year. Against that backdrop, many EMs looked quite resilient. Going forward, there could be more joy for EM assets, as China’s zero-Covid policy finally seems to be over.

European stocks had a difficult month, losing 0.9% in sterling terms through December, making for an annual 7.6% loss overall. The European Central Bank (ECB) indicated further interest rate hikes were on the cards in 2023 after a resurgence of European inflation. This weighed on investor sentiment heavily.

Elsewhere, US equities dropped significantly in December. Large cap stocks lost 6.7% over the month, and losses for the technology sector were even greater at 9.6%. This was again a repeat of the 2022 trend. The S&P 500 lost 7.8% in sterling terms for the whole year, while the tech-heavy Nasdaq fell an astonishing 24%. Tech companies are usually considered growth or long-duration assets, making them sensitive to changes in interest rates. Last year saw the fastest pace of monetary tightening – and thus interest rate rises – in a generation. The end of ‘easy money’ was therefore bad news for the US tech sector.

On that front, the US Federal Reserve (Fed) announced another 0.5% interest rate hike in December, leaving its benchmark Fed funds rate in the 4.25%-4.5% range. Given that rates were at zero as recently as February, we witnessed a huge change in interest rate levels in 2022. The pace of monetary tightening was comparable to the inflationary period in the 1970s and early 80s. Back then though, interest rates began from a much higher starting point, and asset markets were no way near their current size and importance to the real economy. As discussed before, this means the Fed’s aggressive tightening has a much larger impact today – even if the current absolute rate is still not high by long-term historical standards.

Bond markets felt the brunt of this impact. In 2022, yields rose at their fastest pace in decades, squeezed upward by a significant drain of liquidity. It meant bond valuations lost in just a year what they had accumulated in very extended valuations over the previous decade. Bond dynamics were also at the heart of everything that happened in equities last year, as rising real (inflation-adjusted) yields lowers the relative attractiveness of stocks, marking the end of the TINA (‘there is no alternative’) era for equity markets. Bond values suffered again in December, as central bankers made it known that the tightening cycle had longer to run. US Treasury yields rose through the month, despite negative economic news flow. We saw this in the UK, too. UK gilt values lost 23.8% in 2022, while December alone recorded a huge spike in volatility, reflected in global bond markets.

Destabilisation was a key theme of last year. Bond values are the bedrock against which other assets are valued, from stocks to credit and commodities. Rising bond yields mean widening credits spreads as the default risk in lending to companies increases – and lower equity valuations as TINA ends and the cost of capital increases. For portfolios, the usual counterbalance of bonds against equities did not play out in 2022, as the bedrock was too unstable. Fortunately, much of that volatility is already behind us now. Markets have had a whole year to digest sharply higher interest rates and, while we are not entirely out of the woods, the year ahead should bring more normality in bond markets. It was not a very merry Christmas for investors, but the new year will hopefully be happier. 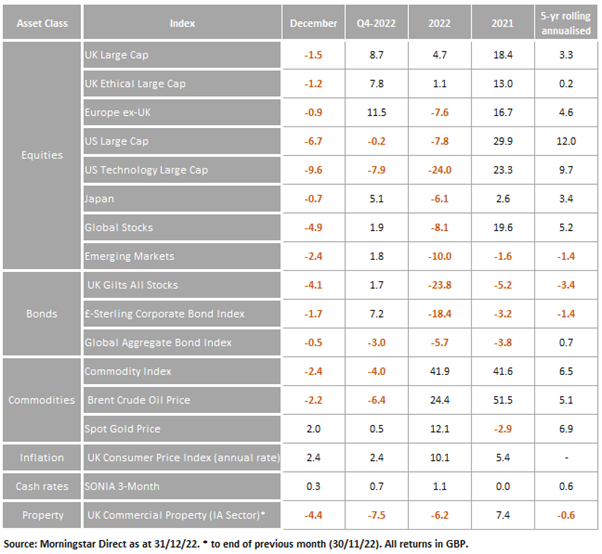