Christmas did not quite bring the hoped-for ‘Santa Rally’, but investors still received many happy returns in December. Equity markets wobbled during the month, but overall global equities climbed 1.6% in sterling terms. This capped off a strong quarter (and year) in stock markets, with the MSCI World index rising 19.6% in 2021. It means that, despite the well-known COVID scares and supply chain problems of the last 12 months, investors have fared well during the pandemic.

For 2021 overall, the US once again outshone its peers, with the S&P 500 returning 21.2% compared to 18.4% for the UK and 16.7% for Europe. Much like in 2020, investors flocked to the US tech sector, which ended the year 30% up. In December itself, though, this outperformance was reversed. The S&P returned a decent 2.1% on the month, but the tech-heavy Nasdaq fell 1.6%. By contrast, the UK and Europe climbed 4.4% and 3.9% respectively. This was despite soaring COVID cases in both regions – and the introduction of new restrictions in the latter.

When looking at the quarterly picture, the US was dominant. This was driven by the continued rise in profitability of US American companies and positive investor flows into equities. That said, the fourth quarter was kind to most regions, except for Japan (-4.4%) or emerging markets (‑1.8%), the only equity markets to end Q4 in the red. Emerging markets had a particularly hard year, with MSCI EM the only major equity benchmark to post negative returns for 2021.

December’s equity performance was comfortably outdone by returns in commodity markets. The Goldman Sachs Commodity Index rose 5.1%, while Brent Crude oil prices soared 9.7%. This capped a stellar 41.6% return for commodities over the year. Much of this was driven by oil prices – which shot up 51.6% – as well as industrial metals. Well-documented problems of supply chains (as seen in the UK’s September fuel crisis) while an easing of restrictions across many regions led to a strong recovery in demand.

Industrial metals – particularly those used in newer technologies and infrastructure – also found support. This specific price pressure appears to be structural, driven by the rapid green transition across developed economies. Gold prices, by contrast, fared much less well; it returned -1.1% in December, and -2.9% for 2021 overall.

December’s reversal of fortunes for equity markets had much to do with central bank action. The Bank of England surprised investors by becoming the first major central bank to raise interest rates since the start of the pandemic (straight after surprising investors by not doing so in November). Meanwhile, the US Federal Reserve (Fed) pivoted to a hawkish outlook for monetary policy. In its December meeting, it announced a faster reduction of bond purchases starting in January, and that it expected to raise interest rates three times in 2022.

The minutes from that meeting were only released this week – and showed a decidedly more hawkish Federal Open Market Committee (FOMC) than many expected (we cover this in a separate article below). Following the Fed’s announcement, the European Central Bank (ECB) announced a similar reduction in its bond-buying programme over the first few months of 2022.

These actions pushed up bond yields and led to the volatility in equity markets. All in all, December 2021 marked the turning point in global central bank policy – from emergency support to the post-pandemic normal. The rapid spread of the omicron variant across the world could still complicate this picture, particularly in the short term. But so far, central bankers seem determined to push through to the next stage of the transition.

Should that play out, the heady returns of the last two years could be difficult to replicate. Tightening central bank policy means less liquid markets. In the best-case scenario, monetary support would be replaced by economic optimism spurring business investment, as the world transitions out of the pandemic. But even in that case, lower liquidity levels and higher yields can create pockets of volatility. Going forward, we could see more bumpy months like December – even if they end in the green. 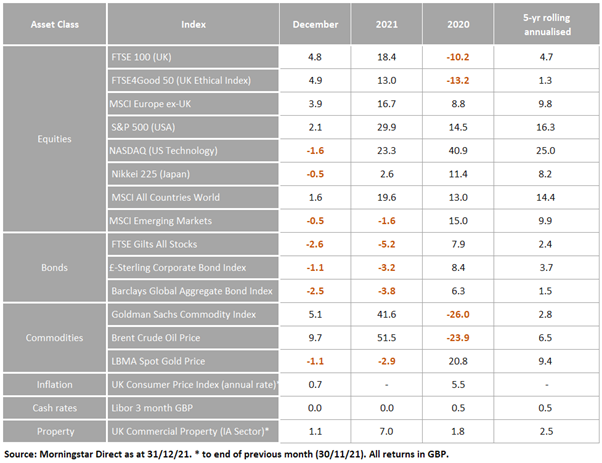