July was a great month for global investors. In sterling terms, the MSCI World Index climbed 6.8%, while bond yields fell across board, boosting bond values. Almost all the major equity indices we track saw significant gains with the exception of emerging market stocks, which traded mostly sideways but ended 0.4% down. Highlights came from the US, where the broad S&P 500 index jumped 9%. The Nasdaq – which houses America’s technology giants – gained a whopping 12.2%. This alone went some way to generating the healthy returns seen at the global scale. Even so, more economically challenged regions like the UK and Europe fared well – with the FTSE 100 gaining 3.7% on the month.

In truth, July was a rare spot of sunshine in an otherwise dreary year. Despite positive monthly returns across most asset classes, the year-to-date figures are still significantly in the red. European equities have shed more than 11% this year, as has the US tech sector. The energy and resource-heavy FTSE 100 is the only major equity index to hold a net gain in 2022 so far. And this is largely due to the UK’s historical underperformance: UK stocks are still below their pre-pandemic peak, while the US has outrun its own pre-pandemic peak by nearly a quarter.

The source of stock markets’ recent joy is also the source of their previous woes: bond yields. Bonds have been hammered this year by rapid inflation and aggressive tightening from central banks. This sharp spike in yields (which are the inverse of prices) drove up the ‘risk-free’ rate of return and made equities relatively less attractive. But in July, this trend reversed. Both government bond yields and credit spreads (the risk premium between corporate and government borrowing rates) came down, easing financial conditions and improving stock valuations.

Why has the mood shifted among bond traders? Some point to an easing of inflation concerns. Despite massive price increases still filtering through all over the world, there is certainly some evidence that input costs are cooling. Crude oil, which has jumped nearly 50% this year, fell in July. Overall, Goldman Sachs’ Commodity Index registered a 0.2% fall last month. Prices for downstream goods are still increasing, but there are signs that consumer demand is tailing off faster than expected. Judging from bond markets, consumer inflation is set to peak around the end of this year and return to a more normal level soon after.

The main driver of market optimism, though, is the thought of how central banks might react. Weak economic data and talk of a looming global recession have shifted monetary policy expectations dramatically. Although the US Federal Reserve (Fed) raised interest rates sharply again last week, the tone of Fed Chair Jay Powell’s speech was extremely well received by investors. As we wrote at the time, bond markets are now implying a near-term peak in rates, with cuts expected as soon as the first half of next year.

Poor economic data is the main evidence backing up this view. Monetary policy works on a substantial lag, and if markets are right that inflation is at (or close to) its peak, further aggression from central banks will do little to quell short-term price rises. Instead, Fed hawkishness will only serve to worsen growth in the future. Not wanting to unwittingly cause or worsen a potential recession down the line – the thought goes – the Fed is likely to loosen its grip.

As some commentators have pointed out, the trouble with this view is that it goes against what the central bank is itself saying. Powell hinted at a potential slowdown in rises at the last Fed meeting, but also reemphasised his commitment to bringing inflation down above all else. As Bloomberg’s John Authers recently noted, investor optimism pushed real (inflation-adjusted) yields down to almost zero last week. This is despite clear signs from the Fed that it wants financial conditions – and real yields in particular – to tighten (rise) as it fights historic price rises.

The old adage goes that investors should never fight the Fed, but that increasingly looks like what bond traders are doing. One of the biggest conundrums here is that the rationale for Fed loosening is the poverty of economic data, and yet the recent rally in stocks and bonds suggests markets think the opposite. Bond markets are not currently signalling an imminent US or global recession, but the worry is that they expect the Fed to react as though there is one.

The answer is that markets seem to be betting on the proverbial ‘soft landing’, where a central bank manages to tame price pressures and slow growth without causing mass bankruptcies or outright recession. Economically speaking, this is certainly possible. Recent business sentiment surveys point to falling price pressures without a stepwise fall in output. Increases in labour participation throughout the year are similarly reassuring.

There are clear pockets of concern though. On Thursday 4 August, the Bank of England released yet another dire warning for the UK economy, predicting an extended recession coupled with sky-high inflation. In Europe, the energy crunch could turn to rolling blackouts come winter. And in China, the property market is still languishing, while geopolitical tensions are higher than ever. Whatever the chances of a soft landing for the US, they are much less so elsewhere.

Dislocation would undoubtedly put pressure on asset prices, which are still highly valued despite falling back this year. This means that a soft economic landing does not necessarily mean a soft one for asset prices. The former certainly helps the latter though, and we can hope that the current optimism will be enough to see us through. If so, July could be the start of a better 2022. If not, it will likely prove a false dawn. 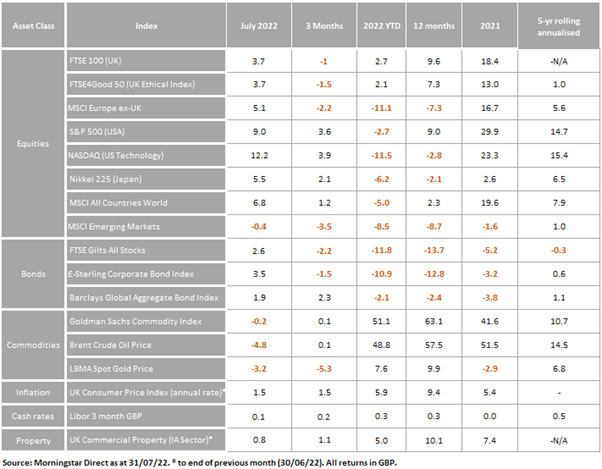