June was not a strong month for global equities, which declined 5% for UK£ sterling investors on the back of worries around an upcoming global recession. In fact, the first six months of 2022 proved to be the worst first half of the year in more than 50 years for major equity markets. The negative sentiment was mainly driven by further tightening monetary policy measures and attempts by most of the major central banks to tame inflation.

Government bonds were hit as markets moved to price in significant further interest rate hikes on top of what had already been announced. Rates are expected to rise in the US, UK and Europe into next year – adding to the pressure on equity valuations and dampening the outlook for economic growth. Fears of recession remain front of mind as the cost-of-living squeeze hit consumer confidence and their pockets as central banks made efforts to control inflation.

For the UK, unemployment remains low, but so does consumer confidence. Negative real wage growth, rising mortgage costs and higher food and energy prices all helped push UK equities into the red in June. Despite the very strong first half of the year compared to other major markets, UK equities finished the month down 5.5% and 1% year-to-date

Europe lagged other key equity markets, dropping 7%, with the ECB signalling plans to hike interest rates in July, while energy prices continuing their upward momentum. European consumer confidence has also fallen dramatically. The biggest risk to the Eurozone economy is the reduction in gas supplies coming from Russia. Prices are up and there are genuine fears of energy rationing which would have severe consequences for the European economy.

US equities fell 4.8%, with the technology sector down 5.2%. Further rises in yields following the hawkish policy announcements from the US Federal Reserve (Fed) continued to harm valuations for growth companies. The Fed now looks likely to raise interest rates by 0.75% by the end of the year to combat inflation. While US unemployment remains low and wage growth has been strong, consumer sentiment has fallen sharply. The Fed forecasts unemployment will need to rise to just above 4% to bring inflation down. However, the market is clearly worried that getting inflation under control could require unemployment to rise much higher, as has historically been the case.

Higher interest rates are starting to weigh on economic activity. US house prices are almost 40% higher than January 2020, and 30-year fixed mortgage rates having risen from below 3% to nearly 6%. At the same time, home sales are declining (it appears unlikely we will see a repeat of the last housing crisis as 95% of Americans today are on long-term fixed rate mortgages, compared with only 80% in 2007).

Emerging Market equities dropped 3.1% in June. However, China saw a bounce back following the easing of some strict Covid lockdown measures. The Chinese Centre for Disease Control and Prevention reported that of 33,000 patients hospitalised with Omicron, only 22 had developed severe illness, all of whom were over 60 and had pre-existing medical conditions. China may yet remove the lockdowns that have severely affected economic activity this year. Further, Chinese monetary policy is easing compared to the rest of the world, which should assist its economic recovery. This was reflected in returns and the expansion of the manufacturing and services sectors activity in June.

One positive that emerged in June was that oil prices ended the month lower for the first time in 2022. While this was driven by fears of slowing global consumption, a knock-on effect could see  inflationary fears ease in the current climate.

In summary, market risks remain, but markets have already fallen a long way. Timing the market – selling now and buying cheaper at a later date – would require an ability that very few professional investors, let alone retail investors, have historically been able to do. We therefore remain compelled to ride through this period. 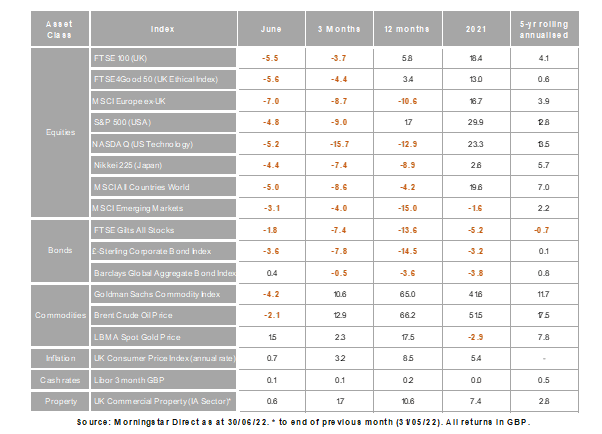