Markets experienced another leg up in June, continuing a positive year for investors. It brings us to the end of another quarter in which good returns were found in almost all asset classes. In the first three months of this year, returns were plentiful but unevenly spread, with equities and riskier assets rallying while bonds struggled. Q2 was more equitable by contrast: investors holding more fixed interest bonds over equities also did well.

A calmer tone in bond markets was one of the big themes of the quarter. Rising yields and inflation scares marked the earlier part of the year, and the inflation story carried over into April and May. The negative effect higher bond yields would have on equities (by lowering their relative attractiveness) gave investors a sense of vertigo into early April, but as we progressed through the quarter markets came to terms with it. This was brought on by a sense that global growth is already cooling from a boil to a simmer. The previously booming US economy showed signs of slowing – albeit still to a decent level – while the growth drop-off in China was more pronounced than had been expected.

These dynamics had a big impact on currency markets. Expectations of a strong global recovery and inflation in the US had put downward pressure on the dollar beforehand, as investors became more confident about emerging markets and, particularly, the outlook for China’s currency, the Renminbi (RMB). When the growth outlook moderated and China began to look weaker, those trends reversed. For international investors, China’s deceleration was compounded by a sense of greater interventionism from the Communist Party. Beijing’s clampdown culture is hardly anything new, but Q2 saw more intense pressure, not just in commodity markets but on currency selling and equities also. This attenuated growth expectations as well as a pause in the RMB’s long run of strength.

Slowing growth expectations pushed more risk-averse investors into safer assets over the last three months, favouring dollar assets – in particular the established large-cap US stocks. This benefitted the US tech giants the most, with the tech-heavy Nasdaq index recording one of the best performances in Q2.

The lessening of inflation fears was most visible in bond markets. Global bond yields peaked in the first half of Q2 before coming back down and settling at a stable level. This was essentially a calming of the global growth excitement, as well as a dissipation of monetary policy fears. Jitters came early on from a sense that central banks might be forced to raise rates or taper asset purchases sooner than expected, choking off the recovery just as it gets underway. Central bankers all over the world – but particularly the Fed – were eager to dispel these fears, reiterating that policy would remain supportive over the foreseeable future.

Nevertheless, last month we saw some indication that tightening is on the horizon. In its June meeting, the Fed signalled that a strong economy might allow it to move away from its emergency monetary support, with a rate rise coming possibly as early as 2022 – but more likely in 2023. This is sooner than markets had been expecting, and the news caused shorter-term US bond yields to rise while longer-term bond yields fell late in the quarter. This flattening of the yield curve is another signal of tempered growth expectations – though we cover the talk of policy tightening in a separate article below.

Even with the global economy coming off the boil, the macroeconomic environment still looks positive, particularly for developed markets. This can be seen in corporate bond spreads (the difference between government yields and corporate yields) which declined again and are heading to historic lows.

The end result of these moves has been a fickle mood in capital markets. We seem to be flip-flopping between the supposed ‘Great Reflation Trade’ and a return to the slow-but-steady outlook of the pre-pandemic world. The former favours cyclical assets, emerging markets and value stocks, while the latter favours bonds, growth stocks and the US tech giants. This indecisiveness has carried over into the second half of the year, and sentiment could quickly shift over the coming months.

On the positive side, the return of dividend pay-outs is a welcome sign along the road back to normal – giving positivity to the banking sector in particular. The early rally in commodities was another signal of normalisation in Q2, but this later fell back after China’s efforts to curb what it sees as excessive speculation. Interestingly, the calming of reflation hopes seems not to have affected oil prices, which continued to rally throughout the quarter.

The rise of the Delta variant was perhaps the main public scare story, threatening the promised end to the pandemic. Fortunately, as the recent spike in British cases has shown, Delta outbreaks look much less worrying for countries with high vaccination rates. But developing countries, which have received far less of the vaccine stockpile than richer nations, are rightfully concerned. Emerging markets subsequently underperformed, hit with a double whammy of virus pessimism and tightening conditions in China.

This is perhaps another factor in the dampening of reflation hopes. In all, though, the outlook from here looks positive. Economic indicators are still high, albeit not at the astronomical levels we have seen before. Things are rolling. 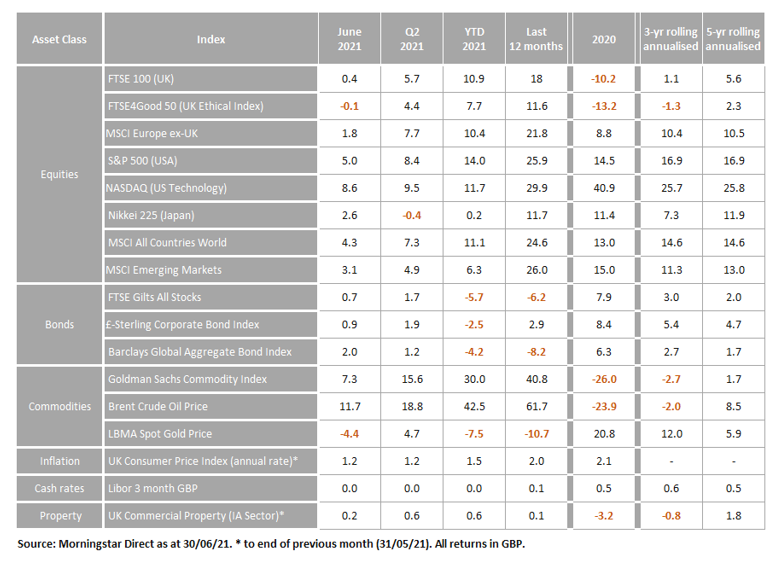