Global equities rebounded in October, rising 2.8% from the perspective of a £-sterling based investor. This came as markets processed mixed third quarter earnings, further monetary tightening, new fiscal support packages and a slowdown in economic activity. Bond market volatility was a big story early in the month, but this thankfully calmed down in the last couple of weeks.

In regional terms, UK equities rose 3%. This was in large part down bounce back in reaction to Rishi Sunak’s new government, which restored some faith in the UK economy and offered stability to the British Pound. UK bonds, which had been in free-fall after September’s “mini” budget, retraced much of the dip, although they finished the month still somewhat below the levels seen before the fiscal policy mistake. The implied fall in both short-term and long-term interest rates was a relief not just for Britons, but also for global investors. UK events rarely have a big impact on worldwide markets, but the threatened collapse of pension funds would have bled across the world’s financial system. Sunak’s perceived stability removed this risk, allowing credit spreads and global equity markets to rally.

In other regions, US equities rose 4.8% in October. This was despite Q3 corporate earnings announcements having been mixed, with major technology names seeing a slowdown in consumer demand, rising costs and contained growth outlooks. Much of the positive sentiment change beyond the stabilisation in the UK will have once again come from the hope that the US central bank – the Fed – may be getting closer to the end of their 2022 interest hiking spree. The US dollar, after a strong rally against other major currencies in the last few months, pulled back, giving some prospect of easing in global financial conditions. European equities also rebounded, climbing 4.3%, with more optimistic corporate earnings results supporting returns. The European Central Bank announced another 75-bps rate hike, in an attempt to tame elevated inflation. Pressures remain, due to the ongoing energy crisis, but October also saw a fallback in gas prices, which helped the European outlook.

Emerging Markets lagged major developed equity markets this month, declining 6.1%. China, the biggest contributor to the index (35%), left investors uneasy, after the communist party congress yielded a hard-line government and a significant drop in attendees. The zero-covid policy is set to remain in the world’s second largest economy, having already slowed activity this year. While aspects of state policy appear to be creating more monetary liquidity, consumers appear to be deeply unsure about their finances, especially given uncertain property prices. Property companies remain in a very difficult situation and more policy efforts may well be needed to stabilise them.

In commodities, oil prices ended the month up 5.7%. “OPEC plus” (including Russia) met at the beginning of the month and promised a larger than expected production cut, which led to an immediate rise in crude oil prices. But, as we noted at the time, the soggy economic outlook continues to be a more important factor than solidarity among oil-producing nations. In addition, a number of them had been struggling to reach the previous oil quotas. The actual fall in production should be milder than headlines suggest.  In comparison to many research forecasts, oil prices remained well within recent trading ranges. 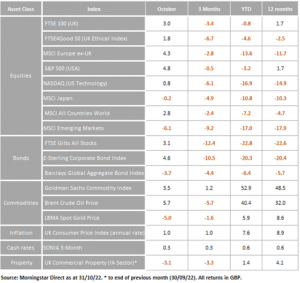