The up and down markets of September resulted in what we described as a flat overall picture of consolidating markets. At first, the picture for October looked much the same, but ended with a more pronounced sell-off over the past two weeks. The looming uncertainty of the US elections, together with the return of lockdowns across Europe but uncertainty over matching fiscal support, meant that Western markets all closed the month in negative territory. Only Emerging Markets were once again able to generate positive returns. The positivity came predominantly from China and South East Asia not experiencing a second wave of the pandemic, thereby moving further ahead in the economic recovery that has now been paused elsewhere. 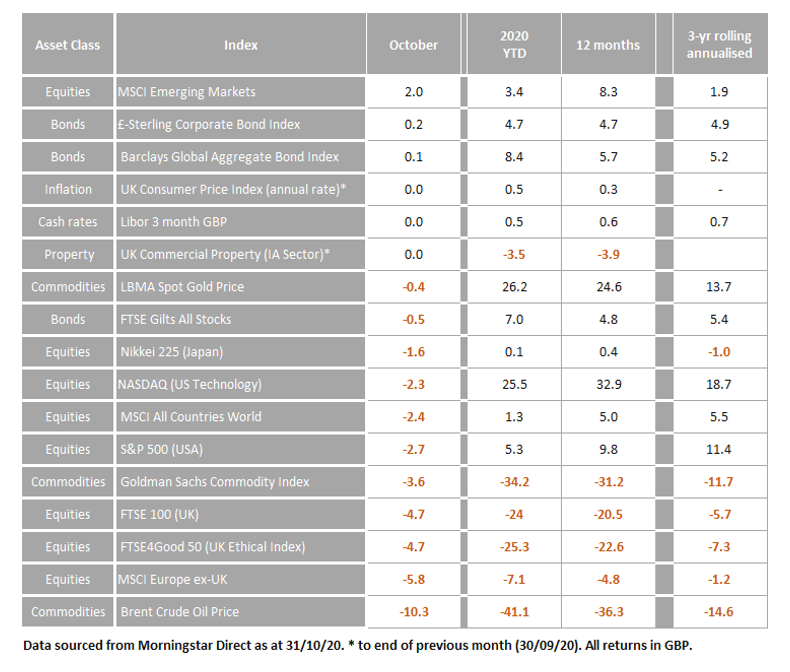 Global equity markets recovered their October losses in the first week of November. The more speculative – and the highly risk-averse parts of the investment community – returned even before the dust slowly began to settle over the US election and lockdown ‘2.0’ fiscal support measures (plus central bank back-up) were announced.

October’s market actions were dominated by the US election and the realisation that the second wave of the pandemic would possibly have just as bad an impact on public health as the first, even when it had initially seemed that hospitalisations and fatalities were much reduced. For the UK, those issues were joined by a return of Brexit uncertainties, as another government trade negotiation deadline on 15 October came and went. Both sides continue to declare that a failure of talks to reach a positive conclusion would equate to an embarrassing failure of state craftsmanship. However, this insight did not lead to notable further developments, except for an absence of further leaks or public outbursts from politician on either side. While we watch the slow progress with some trepidation, we also know that the necessity for a strong economic recovery after the pandemic have created huge incentives for both sides to settle their – by now petty appearing – disagreements. Incentives which are far greater than reputational concerns or egos of individual politicians could ever be.

The 2020 US presidential election campaign may have been an extraordinary historical event, but markets remained curiously dispassionate. Investors were not moved by the chaotic debate between the two candidates, nor were they fazed by the dramatic late plot twist when President Trump caught COVID, the very disease he had sought to downplay for most of 2020. Instead, more notable events here were the oil price falling below $40 again and the concerns over a potential lack of fiscal support while second wave activity restrictions were imposed hard and fast.

Other important highlights in October included the data releases for economic activity levels and corporate earnings covering the summer period. These provided a valuable glimpse of the economic upside potential that exists once coronavirus is dealt with. Meanwhile, the latest upbeat economic data and forward projections from China and wider South East Asia – the only region which can be viewed as dealing successfully with COVID – offered a fresh perspective on where demand recovery momentum may be coming from in 2021.

How the US and China chose to deal with the frictions in their relationship going forward has the potential to be one of the biggest variables of next year. China has managed to leap-frog over the US both in terms of its handing of coronavirus and its economic recovery, which gives it the opportunity to permanently shift global economic balances and alliances eastwards, particularly for Europe. Apart from how China and the US play their cards, much will depend on the effectiveness of the vaccines due to be released and first administered to the most at-risk parts of the population. If they turn out to be successful in overcoming the virus threat, then China’s and Asia’s decisive advantage during 2020 of being better able to live with the virus should quickly disappear again. If the vaccines disappoint, then significant behavioural changes will be required for the western world. This is currently not our assumption, as we take our lead from the aftermath of the Spanish flu, which proved far more deadly than COVID by a long shot, but without particularly shaping and changing public behaviours in its aftermath.