September brought the summer joy in markets to an abrupt end. Investors were nervous about China’s largest property developer Evergrande defaulting on its debt triggering a Chinese financial crisis. Added to this were worse-than-expected macroeconomic data and rising prices leading to fears of higher interest rates. US and UK government bond yields increased as central bankers reasserted their commitment to reducing emergency monetary support measures but also considering rising inflation, and supply bottlenecks appearing longer lasting than had been anticipated.

Global equities ended the month 2.1% lower in sterling terms (reversing much of the gains of August) as a slowing of corporate earnings expectations, inflation, rising bond yields and spikes in energy prices put pressure on markets.

The main US market returned -2.7% (-3.3% for the US technology sector) as the US Federal Reserve (Fed) announced it will likely begin tapering its asset purchase programme before the end of the year and drive down future purchases to zero by the middle of 2022. Rising yields affected the more yield-sensitive growth and tech sectors, while the energy and cyclical value sectors led the market. Elsewhere, Japanese equities bucked the negative trend thanks to an improving COVID-19 vaccination programme, which meant Japan’s ‘state of emergency’ was lifted in September for the first time since April.

On the other hand, the commodity and banking-focused main UK equity market ended the month with a 0.2% decline, naturally benefitting from the supply constraints and the change in monetary policy in the UK. Other global markets were also negative, Europe returned -3.6% as it continued to lag other global economies out of recession. Emerging Markets equities returned -2%, as concerns over Evergrande’s debt crisis kept Chinese equities in the red, with continued uncertainty over its bond payments.

While the Fed indicated tapering may begin as early as November, reiterating comments on a strong jobs market, ongoing economic growth, and transitory inflation, the members of the Federal Open Markets Committee also suggested rising interest rates might not be as far away as markets would hope. Out of 18 Fed officials, nine said they expect rates to be raised by the end of 2022, up from seven officials in June. In the UK, the BoE’s Monetary Policy Committee said no immediate action was needed to quell inflation, although recent price news had strengthened the case for “modest tightening of policy” over the next few years. However, uncertainty around rates continued, with the BoE unwilling to rule out a hike this year.

Looking ahead, the persistence of the more infectious Delta variant, elevated inflation, supply chain blockages and spiralling raw material prices are increasingly dampening the previously upbeat sentiment. With the political standoff in the US over its debt ceiling, possible contagion from the collapse of Evergrande, and imminent tapering from the Fed, we will be watching markets very carefully in the last quarter. It can be easy – perhaps too easy – to look around the world and only look at the ‘wall of worries’ we face. Investors should not lose sight of the significant long-term positives of seemingly strengthening economic growth, alongside rising business investment and robust corporate profit momentum demonstrated by companies across the globe. 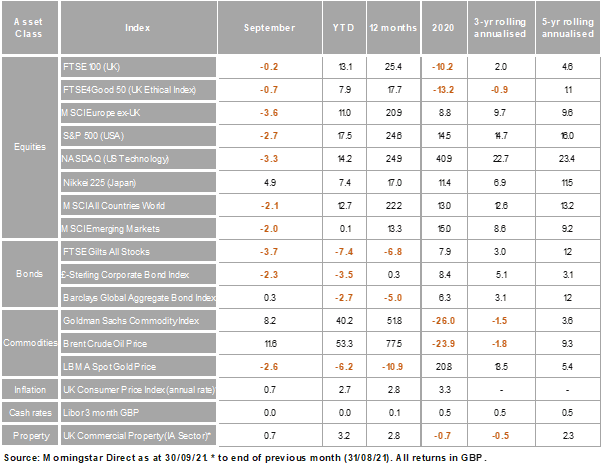