September’s market activity displayed similarities to August: after an encouraging start, every asset class bar gold headed south. The month ended with an acceleration in the sell-off, which brought the summer quarter to a disappointing close. Fast-rising bond yields and another slump in £-sterling relative to the US dollar were the drivers for UK-based investors, but the acceleration in the US stock market decline relative to the UK market meant that not even the appreciation in the value of the dollar was enough to counterbalance the decline. The energy crisis and rising costs of living affected sentiment and as a result, all major equity markets ended the month in the red. Global equities declined 5.7% for sterling investors.

Government bond yields also reached another cyclical high, largely generated by new Prime Minister Liz Truss’s economic programme which caused immediate and widespread fear over fiscal sustainability. Even the IMF called on the UK to “re-evaluate” the plan to ensure government fiscal policy and BoE monetary policies were not working against each other. The subsequent pressure on the UK gilt market brought unintended consequences on pension funds and prompted the BoE to intervene by buying long-dated bonds to stabilise the market. In market terms, the UK had a weak month, down 5.2%.

In US dollar terms, US equities fell 9.3% September, with the technology sector down 10.5%. The Fed confirmed its commitment to tackling inflation, even if it means sacrificing some economic growth. This ongoing policy strengthened the dollar against other major currencies and significantly against the euro, Japanese yen, Chinese renminbi and sterling. In Japan, it forced the Japanese Ministry of Finance to intervene in the foreign exchange market to stem the yen’s depreciation.

Emerging Markets lagged other major equity markets in September, down 8%, while the Japanese Nikkei 225 returned -6.6%.

Europe was the most resilient of the major developed equity markets, falling 4.8% over concerns around natural gas supplies, elevated energy prices and further monetary policy tightening. In commodities, oil prices ended the month down 7.2%. With the third quarter behind us, attention turns towards the Q3 corporate earnings season and company signals on outlook.

The government policy error in the UK, forcing intervention from the BoE demonstrated the danger of unintended consequences as major central banks around the world all have policies to tighten their monetary policy. More policy errors could force them to change course and could therefore keep markets volatile. For the time being, US interest rates are expected to continue to rise quickly to at least 4.5% by early 2023 – anything beyond those levels would become a negative surprise for markets.

If there is a silver lining to September’s market returns, perhaps it is that expected returns should be higher going forward. In particular, real yields (after adjusting for inflation) have risen to levels not seen since 2010 and the GFC years. 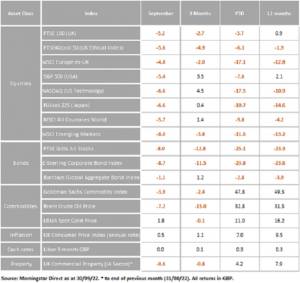