The Spring Statement is not used as a full Budget, but more for tinkering of the numbers a little and providing some direction for future fiscal changes.  However, since the Budget in the Autumn of 2021, inflation has risen sharply and everyone has felt the effects already, especially those on lower incomes.  More than simple tinkering was therefore expected.

Although lots of detail was announced across the whole spectrum of the economy, we have highlighted below the major issues changes for personal finances.

National Insurance
The Treasury’s plan, as detailed in our recent Spring Newsletter, was to introduce a rise of 1.25% in the rate of National Insurance from April.  However, expectations were high that this change might be backdated or possibly a lower increase would be introduced instead.  The Chancellor announced that the increase would remain in place though and increase from April as planned.  But he did tinker.

The announced change in the Spring Statement was the threshold level at which the increase would take effect.  From 6 April, the initial planned increase in the Primary Threshold (the rate at which employees start paying National Insurance) will still increase by the planned 3.2%, but from July 2022 this increases again by a much larger amount to £12,570.  This will defer the level at which people start to pay National Insurance to the same threshold as they start paying income tax, from July.

The Chancellor has said the Primary Threshold for National Insurance and the Personal Allowance for income tax will then remain aligned.

For the self-employed, who pay National Insurance on an annual basis, this increase of the threshold in July will mean an effective rate across the 2022/23 tax year of £11,908. 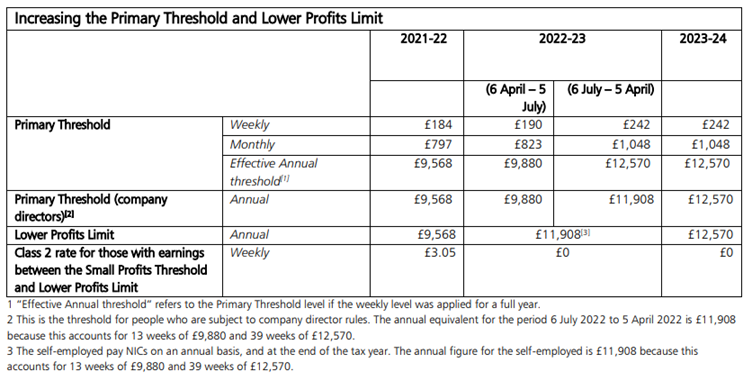 For those earning over £34,000, the increase in the amount of National Insurance they pay will be channeled into funding health and social care, as previously announced.

Income tax
No changes will come into effect from April 2022 but from April 2024, the basic rate of income tax will fall from 20% to 19%.  The Personal Allowance of £12,570 will not be increased though until 2026, meaning over those years wage rises and annual increases to pensions in payment will move more people beyond the personal allowance and into the basic rate tax band.  The higher rate and additional rate income tax thresholds will also remain unchanged, at £37,701 (above the Personal Allowance) and £150,000 respectively.

For basic rate taxpayers, it may be worthwhile considering a pension contribution before the 19% income tax rate in April 2024, to receive the 20% tax relief whilst it remains.  In a similar vein, drawing pensions as a basic rate taxpayer from April 2024 will mean the lower 19% tax is paid. For people with offshore investment bonds, deferring encashments until then, if appropriate to do so, will mean that tax on gains within the basic rate will be lower, as gains on bonds are subject to income tax rather than capital gains tax.  However, you should talk to us further before considering any of the above, as other considerations may need to be taken into account.

Other taxes
The annual capital gains tax allowance is also frozen until 2026, at £12,300.  Similarly frozen until then are the pension Lifetime Allowance at £1,073,100 and the Inheritance Tax Nil Rate Band (the tax free amount of people’s estates) of £325,000.  As assets grow, this will capture more tax as people exceed the frozen thresholds.

And finally…
Whilst not directly linked to our financial advice, the other noticeable announcement in the Spring Statement was the reduction in fuel duty, by 5p per litre from 23rd March on petrol and diesel for 12 months.  Whilst welcome, this will make very little difference to the overall cost of filling up our cars.

Past performance is not a reliable guide to the future. The value of investments and the income from them can go down as well as up. The value of tax reliefs depend upon individual circumstances and tax rules may change. This newsletter is provided strictly for general consideration only and is based on our understanding of current law and HM Revenue & Customs practice. No action must be taken, or refrained from, based on its contents alone. Accordingly, no responsibility can be assumed for any loss occasioned in connection with the content hereof and any such action or inaction. Professional advice is necessary for every case.